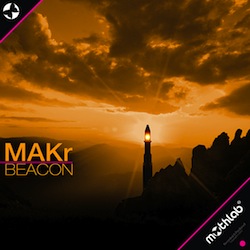 Out Today July 10•2013 on:
Beatport*I-Tunes*Juno Download*Djshop.de*Amazon*DjTunes*Djdownload and more…..
check it out here! beatport.com

There has been too much damage done. But we – as fighters, as lovers, as artists, as people – can rise above. “Beacon” is a tribute to this; our innate ability to see the light in the darkness and overcome. Hopeful yet realistic, MAKr’s Beacon is positive without being ignorant to any aspect of humanity. This vision is built with consistent rhythmic form and sonic textures approached from different perspectives. In constructing Beacon, the band leveraged its foundation in improvisation. All tracks are studio creations; MAKr formed complete ideas while simultaneously writing and recording each of their parts. The album’s truest example of this process can be found within “Solstice”, an undoctored eight minutes taken from a very late night at the end of full day of recording. While the fully improvised and unplanned “Solstice” was recorded in one take, other songs were shaped and molded over the course of many iterations. This more methodical process was used while writing “Free”, “Where Is The Moon”, “Frequency Range”, as well as the lush title track, “Beacon”. “That Dialogue Thing” and “The Reach” also used this process, but includes sonic layering and looping, as well as counterpoint creation, all done by the band in post production. The final track, “Polaris”, is a final statement from Zang and Mariner. It is a richly textured, ambient call to the light and is meant to be a reminder that the beacon is always present, no matter how dark circumstances may seem. Beacon is dedicated to the baby owl that lost its way, but thankfully found a home on a tiny ledge outside of MAKr’s studio door. Recorded and produced by MothLab Recordings Copyright © 2013