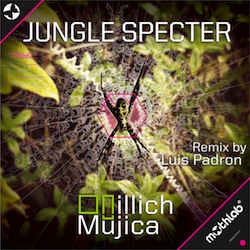 Out today November 13th, 2013 ‘Jungle Specter’ by illich Mujica
On Beatport*I-Tunes*Juno Download*Djshop.de*Amazon*DjTunes*Djdownload and more…..
check it out here beatport.com

Written in partial isolation in the middle of the Haiku Jungle of the Hawaiian island of Maui, “Jungle Specter” represents illich Mujica’s battle against his internal demons of the past. In the Original Mix, Mujica’s field recordings of insects, bugs and jungle atmospherics are blended with synthetic, electronic notes and a melancholic, sustained melodic riff to highlight the deep lamentation of a jungle specter voice who watches eras of our life die, dancing on top of the remains. Luis Padron’s debut Remix strips down the overdrive riff of its original counterpart to make room for a booming beat, while allowing the kaleidoscope of digital insects come to the foreground. The dark, dangerous and energetic reinterpretation of the melody carries the original spirit of Jungle Specter, while allowing all other percussive elements to soar, presenting the perfect choice for a peak-hour Techno performance.