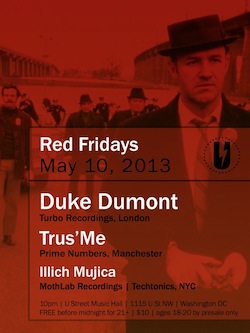 DUKE DUMONT
https://soundcloud.com/dukedumont
Duke Dumont’s early career was mentored by Switch, and he soon developed into the “go-to” remixer for pop acts such as Lily Allen and Bat For Lashes. In 2011 he began working on original productions; setting out two EPs on Tiga’s Turbo Recordings, and receiving support from Diplo, Annie Mac, Martyn, Erol Alkan, Tiesto and Avicii. His most notable release, 2012’s “The Giver,” is said to have been heard simultaneously on all three floors of London’s Fabric on any given night. D

Trus’me
https://soundcloud.com/trusme
With his love for music tracing way back to an early age by dabbling with various instruments and then moving on to develop a passion for record collecting, Trus’me found his calling after learning the art of mixing and sample digging. Surrounded by the heads of Manchester and its deep rooted music scene, one couldn’t deny that it was an effortless task to be exposed to good music from all genres, thus explaining his constantly evolving tastes as evident in his eclectic DJ sets as well as in his uniquely, diverse productions. “Like bookends some 12’s will work with both the beginning and the end of the night, such is the classy sampling from Trus’me” (Peter Nicholson, XLR8R).