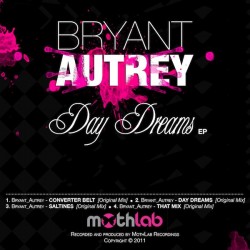 Day Dreams as a whole, like most of Bryant Autrey’s music, represents an idea or impressions from particular events formed into sound. The root is always Techno at the base with elements fused together to create a frequency and movement that signifies for example: “The Day Dream”. “Day Dreams” basically comes down to the break, just as with this track,you begin to fade away into a state of vacation and relief. Relief, then a snap back to reality with this heavy floor filler. On “That Mix” there’s heavy focus on the vocal hook that rolls out through the entire early stages of the track until being unravelled into a time stretched reminder of what you’re listening to: That Mix! The track was an experiment, where two single original tracks where meshed and remixed. “Saltines” has some original samples recorded in the field, like parrots communicating. It begins with a very nice low bass groove and some shakey percussion to compliment the top end before a plummet into the very bottom of the break. It climaxes nicely in the mid section and unfolds into a great heavy mixpoint. “Converter Belt” was a lot simpler as far as it’s inspiration. It’s all about the bass that overlays the whole of the track. It may have sounded like the hum of a car engine at one point with the flapping of percussion and hats rolling over themselves